Recent events in the Russian-Ukrainian war:

“This is an unacceptable option for opening humanitarian corridors,” said Deputy Prime Minister of Ukraine Iryna Verashchuk at a briefing.

According to the Russian proposal, the only option for civilians fleeing Kiev and the suburbs would be to go to Gomel to neighboring Belarus. Civilians from Kharkiv and Sumy in eastern Ukraine will have to flee to the Russian city of Belgorod.

Belarus is a key ally of Russian President Vladimir Putin and has served as a launching pad for the invasion.

The Ukrainian government is proposing eight humanitarian corridors, including from the southern port of Mariupol, that will allow civilians to travel to the western regions of Ukraine, where there is no Russian shelling.

“We demand that the Russian Federation stop manipulating and abusing the trust of the leaders of France, China, Turkey and India,” Verashchuk said.

THE HAGUE, The Netherlands – The representative of Kiev on Monday called on the UN Supreme Court to order Russia to stop the destructive invasion of Ukraine, at a hearing that Russia did not accept.

The representative of Ukraine Anton Karinevich told the judges of the International Court of Justice: “Russia must be stopped, and the court must play its part in stopping it.”

Russian seats in the Great Hall of Justice at the Palace of Peace headquarters were empty to consider Ukraine’s request that a court order Moscow to stop the attack.

BEIJING – China’s foreign minister on Monday called Russia “Beijing’s most important strategic partner” amid its persistent refusal to condemn the invasion of Ukraine.

Wang Yi told reporters that ties with Moscow are “one of the most important bilateral relations in the world,” adding that “no matter how dangerous the international landscape, we will maintain our strategic focus and promote a comprehensive Sino-Russian partnership.” a new era. “

China has broken with the United States, Europe and other countries that imposed sanctions on Russia after its invasion of Ukraine. It says that Washington is to blame for the conflict in Ukraine.

VILNIUS, Lithuania – US Secretary of State Anthony Blinken has begun a lightning visit to the three Baltic states, which are increasingly tense, watching as Russia continues to invade Ukraine.

The former Soviet republics of Latvia, Lithuania and Estonia are members of NATO, and Blinken is seeking to assure them of defending the alliance in the event that Russia decides to expand its military operations to other neighboring countries.

Memories of the Soviet occupation of the Baltic states are still fresh, and after the invasion of Ukraine last month, NATO quickly increased its troop presence on the Allies’ eastern flank, while the United States promised additional support.

Blinken’s Baltic tour opened on Monday in the Lithuanian capital Vilnius, where support for Ukraine’s resistance to the government’s invasion is palpable with signs of solidarity with Ukrainians at many businesses as well as in public buildings and buses.

“Unfortunately, the deteriorating security situation in the Baltic region is of great concern to all of us and to the world,” said Lithuanian President Gitanas Nausea Blinken. “Russia’s reckless aggression against Ukraine proves once again that this is a long-term threat to European security, the security of our alliance.”

Nausea said that the policy of containment is no longer enough and that “pre-defense” is needed now. He predicted that “Putin will not stop in Ukraine if he is not stopped by Putin. Our collective duty as a nation is to help all Ukrainians by all available means. Having said all that, I mean, really all means if we want to avoid World War III. The choice is in our hands. “

Later on Monday Blinken will go to Riga, Latvia, and on Tuesday will visit Tallinn, Estonia

LONDON – The UK Ministry of Defense says Russian forces have not succeeded on the ground in recent days, but appear to be targeting Ukraine’s communications infrastructure “to reduce Ukrainian citizens’ access to reliable news and information”.

The TV tower in Kharkiv was reportedly damaged on Sunday, which stopped broadcasting. On March 1, a TV tower was damaged in Kyiv.

Britain has said that Ukrainian internet access could also be disrupted as a result of collateral damage from Russian infrastructure strikes.

LVIV, Ukraine – Russia has announced a ceasefire and the opening of humanitarian corridors in several parts of Ukraine after two failed attempts to evacuate civilians from the city of Mariupol.

Russia’s task force said a ceasefire would begin Monday morning, the 12th day of the war, for civilians in the Ukrainian capital Kyiv, the southern port of Mariupol, Kharkiv, the second largest city, and Sumy. It was not immediately clear whether the fighting outside the areas mentioned in the task force statement would end or when the ceasefire would end.

Hundreds of thousands of Ukrainian civilians trying to flee to safety on Sunday were forced to hide from Russian shelling that hit cities in central Ukraine, north and south. Ukrainian officials described the “catastrophic” situation during the failed evacuation efforts in the suburbs of Kiev.

Officials from both sides also scheduled a third round of talks on Monday.

The evacuation routes, published by the Russian agency RIA Novosti with reference to the Ministry of Defense, show that civilians will be able to leave for Russia and Belarus. Russian forces will follow a ceasefire with the help of drones, the task force said.

WELLINGTON, New Zealand – The New Zealand government plans to hurry to pass legislation that will allow it to impose economic sanctions on Russia in connection with the invasion of Ukraine.

New Zealand’s existing laws do not allow it to impose significant sanctions except as part of a broader United Nations effort. This has put New Zealand in difficulty as Russia has a veto over the UN Security Council.

Prime Minister Jacinda Ardern said Monday that the new legislation would allow New Zealand to attack people, companies and assets related to the invasion, including Russian oligarchs. New Zealand may also freeze assets and stop the arrival of superyachts or aircraft.

Foreign Minister Nanaja Mahuta said the bill “would send a very clear signal that New Zealand will not become a safe haven for those wishing to relocate their investments here.”

The bill on sanctions against Russia is due to be heard by lawmakers on Wednesday and could be passed as soon as the same day. Ardern said she hoped she would be backed by lawmakers from all parties, although unanimous voting is not guaranteed.

Amid rising gasoline prices in the US, the Biden administration has not yet called for a ban on oil imports to Russia.

In a letter to Democrats released Sunday night, Pelosi said the law would also sever normal trade relations with Russia and Belarus and begin the process of denying Russia access to the World Trade Organization.

Pelosi says the House of Representatives will also give the Biden administration the right to raise tariffs on Russian imports.

Congress intends to approve the Biden administration’s request for $ 10 billion in humanitarian, military and economic support to Ukraine, Pelosi said, as part of comprehensive legislation on public funding this week.

LVIV, Ukraine – Ukrainian Foreign Minister Dmitry Kuleba said more than 20,000 people from 52 countries had already volunteered in Ukraine, where they would serve in the newly formed International Legion. How many foreign volunteers arrived in Ukraine, he did not say.

“Today the whole world is on the side of Ukraine not only in words but also in deeds,” Kuleba said on Ukrainian television on Sunday night.

He did not name the countries of residence of the volunteers, saying some of them forbid their citizens to fight for other countries.

Kuleba also called on Ukrainians living in other countries to launch a campaign for Ukraine’s membership in the European Union. 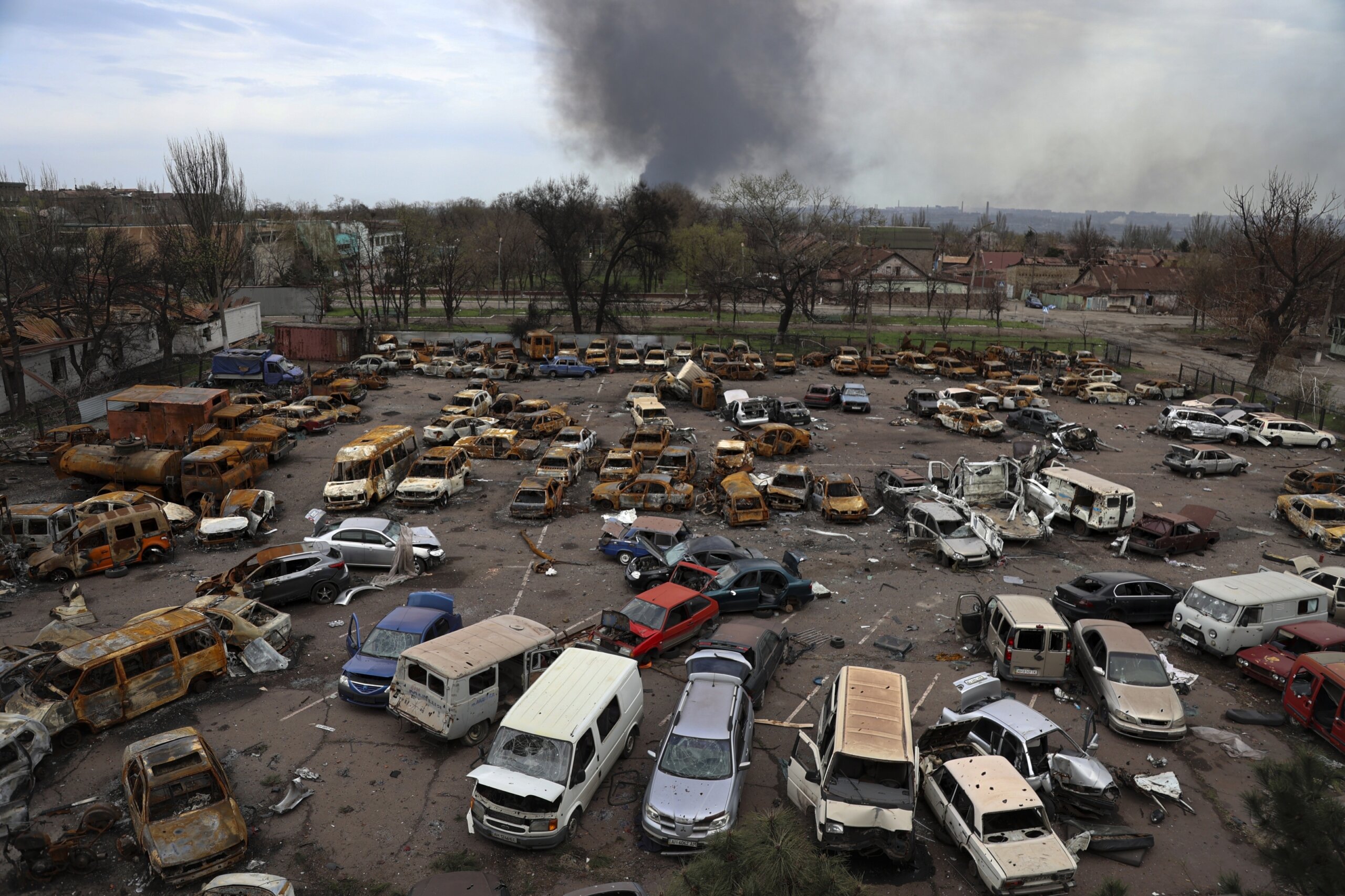